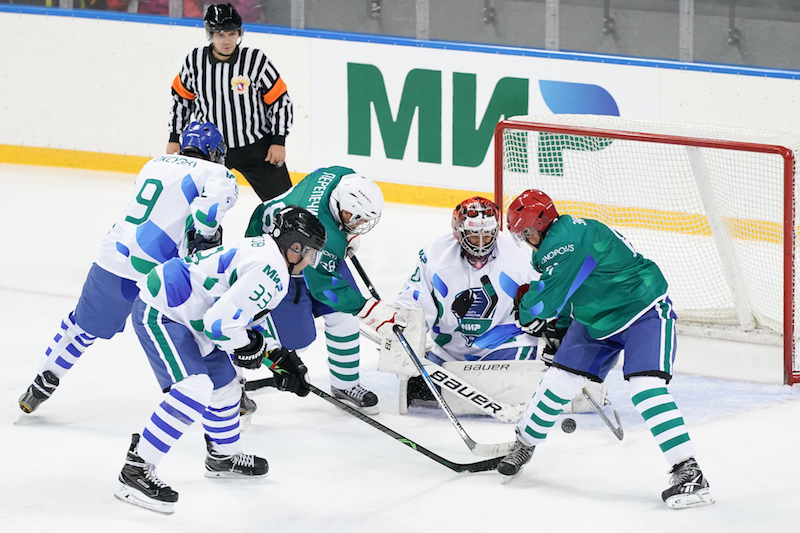 The sporting programme of the Forum of Innovative Financial Technologies FINOPOLIS 2018 kicked off on 17 October with a friendly hockey match at the Shayba Ice Arena in Sochi Olympic Park. Two-time Olympic champion and seven-time world champion Alexander Yakushev, who heads the Council of Legends of the Night Hockey League, took part in the match’s opening ceremony. The legendary hockey player also held an autograph session for the participants and guests of the match at FINOPOLIS 2018.

The Mir payment system team defeated the FINOPOLIS team, which included representatives of Russia’s largest banks and IT companies, by a score of 9:5. Vladimir Komlev, general director of the Mir payment system, scored two goals and was named the most valuable player on his team.

“The Mir hockey team was put together just over a year ago, and we only recently started testing our skills on the ice. Of course, we are very happy about today’s victory. Our opponent played a good game, so it’s particularly nice to be named as one of the best players of this match. Thank you to all the members of both teams for an excellent game! I am certain that meeting with our colleagues and partners not only as part of the Forum’s main programme, but also on the ice will become a great tradition for the Mir payment system. And I would really like for all the participants and fans to take the bright and positive emotions from today’s match to the FINOPOLIS business platform”, Vladimir Komlev said.

The event is organized by the Bank of Russia with the support of the Roscongress Foundation.