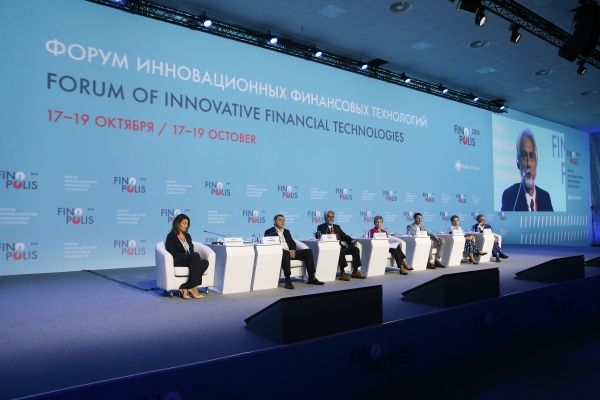 The banks strive to create ecosystems, which makes them pioneers in working with Big Data. But as technology is scaling up, questions about the ownership of personal data keep coming up, as well as challenges in the field of cybersecurity. FINOPOLIS 2018 participants were trying to find the balance between the interests of businesses, the government and the public.

In 2017, banks topped the Big Data buyers list, surpassing many sectors by several times in terms of purchases, said First Deputy Governor of the Bank of Russia Olga Skorobogatova, as she moderated the plenary discussion entitled ‘Data – The New Oil?’. “Big data is now considered to be the fuel for any business, it is just that the banking institutions were among the first to see it as a source of income,” she said.

The risks of liberal policies on data storage were outlined by Vasant Dhar, professor at the Stern School of Business and the Center for Data Science at New York University. “The US has been the innovator in terms of Internet technologies, and in terms of digital platforms. As these platforms became more powerful, the data policies became increasingly liberal. Now they say, ‘we can do whatever we want with your data, essentially’. We’re seeing the consequences of that: the Facebook hack, 50 million users’ profiles hacked. We’re beginning to see the downsides of this Wild West approach to regulation,” he said.

According to Vasant Dhar, there is a tendency to consider data as private property. He referred to the recent decision of the Supreme Court of India. Reviewing the constitutionality of the digital identification software, the Court has concluded that citizens have the right to privacy, but the software is in accordance with the Constitution. Therefore, it is still possible to use Big Data with certain restrictions.

Mobile providers, retail chains and financial services are either working with Big Data already, or are considering it, said Lev Khasis, First Deputy Chairman of the Executive Board of Sberbank. “It is now a total terra incognita and a big challenge for all regulators,” he says. Regulators’ backlog results in many contradictory laws and regulations.

Lev Khasis believes that with the accumulation of enormous amounts of data, protection against cyber threats becomes increasingly important. “The criminal world is moving away from burglary towards data theft. The banks’ capability to protect their clients from such risks will be crucial for their competitiveness,” he said.

Sberbank’s executive suggested that the privacy issue may be a short-term one: “For many young people, the issue of data protection is not so acute anymore. But at all times we need to stay relevant, including to those customers who are opposed to corporations attempting to invade their private life.” He noted that many companies provide the public with free services, and then trade people’s data on their own behalf, as most social networks do. “When a bank uses data from social networks, is that bank’s relationship with a person or with a social network?” Mr. Khasis wonders.

Deputy Chairman of the Management Board of Gazprombank Vadim Kulik believes that Big Data technologies immediately create two legal problems: the issue of property rights and the issue of access rights. “In fact, once the data is in social networks, it becomes the intellectual property of social networks, inseparable from the database itself. But that creates legal ambiguity. The sooner this legal conflict is resolved, the faster the technologies develop,” he noted.

In targeted ads, people are primarily annoyed by offers that come from those who have not been given permission to send them, and those that have absolutely nothing to do with what a person wants. Mr. Kulik is confident that at least the second problem may be solved by increasing the speed and accuracy of data processing. “If data is operated faster and more accurately, the customers will not be so irritated,” he said.

“Those are errors of modeling and analyzing by data scientists,” Deputy President and Chairman of VTB Bank Management Board Olga Dergunova believes. “It is necessary to give users the option to disable the analysis in their profiles, mailboxes and phones. We must follow the path of platform management and electronic consents.”

It is also an ethical issue, and a possible solution would be the code of ethics for working with Big Data, which is being developed by the recently created Big Data Association. That was announced by Anna Serebryanikova, Chief Operating Officer of Megafon, who was elected president of the new institution.

“There are huge concerns that we are creating a digital copy of a person’s identity, which knows more about them than they do themselves, and that we will be able to use this knowledge in the future in a way they do not expect us to,” said Ms. Serebryanikova. “Therefore, we are ready to voluntarily assume obligations regarding the transparency of big data usage and spell out which protocols we will use in order to make the process transparent for the government and the public. It is an important step in the public dialogue on why, how and what for the Big Data is used.”

Many technical questions remain at the government level, Ms. Serebryanikova notes: “The government needs to understand: who owns the government data? What should Open API look like for different kinds of users? Are the capacities of platforms, such as intragovernmental electronic interaction system, sufficient?”

Meanwhile, the very question of efficiency of the banks’ working with Big Data is open. “What we do with the data now, we have been able to do for the last 10 to 15 years. Risk departments work with the same data, with the same models,” Ms. Serebryanikova said. “Renaming our analysts into data scientists does not make analytics more efficient. We deal with big data with available products which are old and typical for the banking sector.”

Even the very understanding of Big Data is already far from the original one. “Now it is primarily the volume of data, and not at all what was behind this concept when it was created: data of different types, from voice to pictures and digits,” Olga Dergunova said. “Many large American banks work with social networks and publish a lot of research on their analysis, but there is not a single one on the methods of monetization. We have conducted a number of studies ourselves. The most specific result: we can say at what time of the day people tend to make purchases. How to monetize that is unclear.” If it is the matter of analysis according to the requirements of the Federal Law 115 (“On Counteracting the Legalization (Laundering) of Incomes”), the banks will be happy to give all the data to the government in order to purchase a ready-made service, VTB Deputy President says.