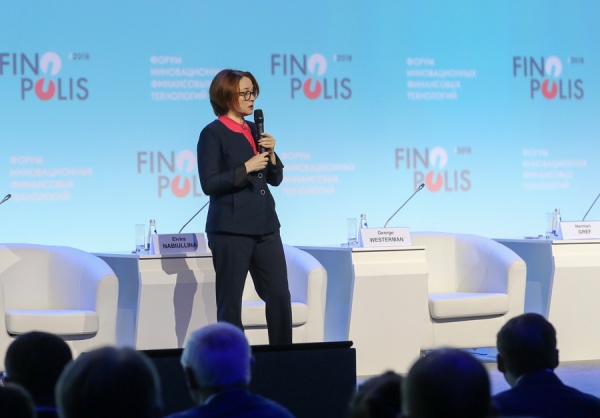 The Forum of Innovative Financial Technologies FINOPOLIS 2018 kicked off in Sochi on 18 October 2018. Speaking at the Forum’s opening ceremony, Bank of Russia Chairwoman Elvira Nabiullina noted: “The Central Bank, as a regulator, faces major challenges in the process of supporting financial technologies. We have to pass between Scylla and Charybdis: avoid stifling financial technologies as they are tenderly embraced by regulation, on the one hand, and, on the other, not to overlook risks that could create problems for citizens and businesses. That’s why it is very important for us to develop approaches to regulation together with business.

“Our financial sector was created very quickly in the 1990s, and it has structural imbalances such as a large number of major players on the financial market and a large share controlled by the government, and we really don’t want financial technologies to preserve or even aggravate these imbalances or defects or, on the contrary, for these imbalances and defects to hinder the development of technology. So, as a regulator, we have been very active in promoting and creating elements of critical national infrastructure to develop the financial market. These include remote identification systems, fast payment systems, and digital profile infrastructure because we believe the existence of such national infrastructure will make it possible to level the playing field for financial market participants”.

On the first day, the Forum participants will discuss interaction between the government and business in creating new technological services and the role of financial technologies in the development of a competitive market. The plenary discussion will be attended by Deputy Prime Minister Maxim Akimov, the heads of major Russian banks, and Principal Research Scientist with the MIT Sloan Initiative on the Digital Economy George Westerman.

Another plenary discussion will focus on the value and opportunities of big data and the rules of the game in the battle for big data as well as the security of the processing, storage, and transmission of data and the capabilities of artificial intelligence.

The benefits and risks of using artificial intelligence will also be discussed at one of the FINOPOLIS 2018 sections. Other topics to be addressed on the first day of the Forum include fast payment systems and the transparency and security of the banking system, among others. In addition, a number of open lectures will be delivered by George Westerman and Professor at the Stern School of Business and the Center for Data Science at New York University Vasant Dhar.

On the first day of the Forum, the winners of Youth Day FinTech will also be awarded and the FinTech startup contest will wrap up.