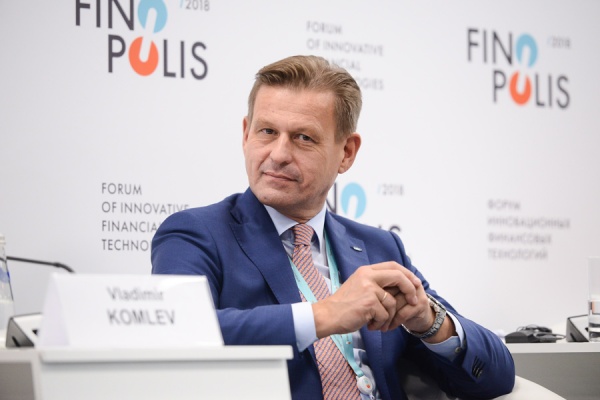 SOCHI, 19 October, PLUS: National Payment Card System (NPCS) General Director Vladimir Komlev took part in Section 1, ‘Rapid Payments: Us and the World’, as part of the main programme at the Forum of Innovative Financial Technologies FINOPOLIS 2018, which is being held in Sochi on 17–19 October.

Rapid payment systems (RPS) were a key topic of the discussion. The participants shared their views on the principles for building the system’s infrastructure, the opportunities that the system is ready to offer the market, and international experience. They also tried to answer the question of what all participants, including operators and regulators, must do in order for the RPS to work successfully.

The discussion was moderated by Alla Bakina, Director of the Central Bank’s National Payment System Department. She noted that the regulator, along with the NPCS, will begin testing the RPS with a pilot group of banks in November of this year. During the first part of the section, Bakina proposed discussing the approach that the NPCS, which will perform operating and clearing functions, will take in building the infrastructure of the system.

During his speech, Komlev spoke about the role of the NPCS in building the system:

“We have to build a fundamentally new platform that is different from everything that is happening in the card business today. Moreover, we face the challenge of making it separable from the NPCS, so that it can exist independently. We have expertise in implementing large-scale projects in cooperation with all market participants, and as we implement the new system, we are utilizing all the experience we have gained in working with card transactions. In the RPS, we are a technical provider that will ensure payment processing and communication between all participants in this ecosystem 24/7 in maximum fail-safety mode. Standards and operational models have already been specified, and we have started deploying data centres”.

Komlev noted that the best experts from the NPCS are working on the project – production engineers and developers who analyse the international experience of building such systems, both operational, technological, and business processes as well as mistakes that have been made, so that they can avoid making the same ones.

“Our main principle in working on the system is to make the customer experience as simple and clear as possible. 70% of the time we spend today on creating the system is aimed at making it convenient, efficient, and easy for the customer to send these payments. We are confident that the rapid payment platform will help reduce the share of cash on the market and that the development of such an efficient, inexpensive, and reliable tool will align the interests of all participants – the regulator, payment systems, and the economy as a whole”.

Asked how settlements between merchants and clients may be structured in the RPS, Komlev explained as follows:

“Today we are discussing various client scenarios with the banks that are involved in the pilot project depending on the payment method, segment, etc. We are looking at different solutions for how to make it more convenient for customers to pay by phone via the RPS at the point of sale. Active work is under way in this regard. In my view, we didn’t pay enough attention today to another very important topic: it’s not just that a rapid payment system is emerging today – the Bank of Russia’s settlement system has also reached a qualitatively new level in terms of online transactional settlements between banks. The transaction is concluded immediately upon completion of the settlements”.